noah and the eight trucks of hanukkah 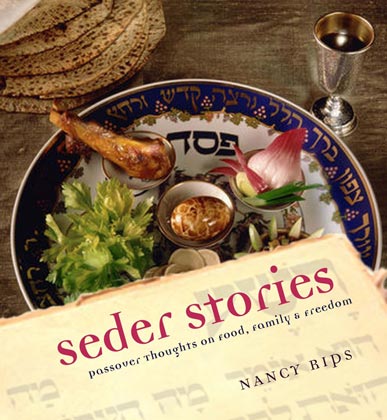 "The Passover Seder is a time to share the stories by which we define ourselves. Many families will be grateful to Nancy Rips for giving them new stories to share."

"This charming collection of Seder-table conversation starters should encourage us to share experiences from our own families that enhance the message of the Exodus as we read the Haggadah."

"Passover is a time to tell stories, and Nancy Rips has collected a treasure trove of terrific tales of Seder that tickle the funny (shank?) bone! Filled with glimpses of Seders in the homes of the famous and not so famous, the stories reveal the power of the ritual to create lifelong memories. A great gift for anyone hosting or attending a Seder -- highly recommended"

"Why is this Passover book unlike all other books? It"s well seasoned with serious thoughts, fun stories, and rich memories of our ancient traditions. It"s one you"ll not want to pass over."

SEDER STORIES is a lighthearted collection of anncedotes, memories, and stories. Rabbi Harold Kushner recalls his first Seders as a married man, and a woman describes how she carpeted and draped her garage, even hung a chandelier, to accomadate 55 people.

SEDER STORIES is a handsome new Passover anthology that is perfect to keep on your coffee table during Pesach.

A notable feature of modern Judaism, especially in America, is its inventiveness-its many variations within its long-standing traditions. As Passover approaches, some families will bring out a variety of Haggadahs; others will revise the old or write new ones for the events of this year.

Nancy Rips, a bookseller and longtime Seder host, collects anecdotes, observations, memories, and jokes-many of them irreverently hilarious-from the likes of Rita Rudner and Rabbi Harold Kushner. The book underscores the humor, the unpredictability, and the love that have shaped so many Seders for so many generations and includes a helpful glossary of terms for the Passover-unenlightened. For most collections.

Besides Rosh Hashanah and Yom Kippur (the Jewish High Holy Days), Passover (Pesach) is the most universally observed religious holiday among Jews in the United States. The cornerstone of Passover is a family celebration/religious/educational experience called "the Seder." The purpose of the Seder is for Jews to recall the "Exodus" from Egyptian slavery, experienced thousands of years ago and described in the Bible.

In every generation, says the Hagaddah (the book of prayers and readings used to conduct a Seder), it is one"s duty to regard himself (or herself) as though he (or she) had personally gone out from Egypt. In so doing, we not only remember for ourselves the value of freedom, faith and tradition, we also pass these values onto the next generations. Nancy Rips' newly-published collection of stories anecdotes, quotations and questions from Cumberland House called simply Seder Stories is a welcome addition to anyone"s Seder planning strategy. Whether you use a "traditional" Hagaddah or have created your own, the quips, quotes and anecdotes contained in Seder Stories can be inserted here and there to enliven your Seder or used as jumping off points for deeper exploration.

Rips presents both traditional and contemporary takes on the meaning of both the holiday of Passover and its celebration. Contributors span pop culture figures, scholars, contemporary thinkers and normal, every-day people. It is the breadth of the wisdom and warmth (and humor) of the of the 101 Passover tidbits that allow this little book to resonate with anyone who attends, prepares, enjoys or is perplexed by this uniquely Jewish week-long festival.

A particularly amusing chapter is called "The Dysfunctional Family Seder Survival Guide." "Pesach is a time for gathering together around the Seder table and reliving the liberation of our people from Egyptian Bondage with signs and wonders," says Rips. "Unfortunately this ritual does not free us from enslavement to our extended family. The "signs" of that togetherness included elevated blood pressure, shattered nerves and a churning in the pit of your stomach."

Rips goes on to provide strategies for dealing with a variety of familial types often unavoidable at the Seder gathering from that annoying aunt, who can"t stop interrupting to your newly self-confessed vegan niece, who scolds (continually) about the hypocrisy of discussing affliction and slavery eating the flesh of exploited animals!

Rips also includes a mini-manual for singles, including a very clever connection between the traditional order of the Seder and the dating game. Seder Stories can help liven up a traditional Seder, or provide source material for those who enjoy creating their own unique Seder experiences. Passover begins with the first Seder on Saturday night, April 19th.

After reading this book I appreciate the similar differences between Jews and every other ethnic and religious group. Not being Jewish, I was unaware of most of the tradition associated with the rite of Passover. I certainly knew it to be the celebration of the migration of the Jewish tribes out of the slavery of Egypt to the land now known almost universally as the Holy Land. However, the symbolic reaffirmation of tradition and Jewish roots so inherent in the holiday was not part of my knowledge.

Reading this book certainly changed that and it also refreshed by belief in the universality of humans and their customs. So many of the actions described by these people when they engaged in their Seder celebrations could be slightly altered and they would describe Christians or even atheists celebrating the holiday of Christmas. Yet, deep within the ceremony there is a long history of tradition, the food that is consumed, the reading of the stories and the reminders that the history of the Jews is a long one. A deep, tragic and convoluted history that must be passed from one generation to the next so that all future generations will know what it means to be a Jew.

It is most unlikely that I will ever be personally involved in a Seder, but now I can appreciate the ceremony, what it means and how it reaffirms that there are similar differences between the Jews and every other ethnic and religious group.

Love the size of the book, and its layout, and for someone who is a bibliophile I loved the font (print) used which makes the book easy to read.

I am so happy to have the book in my home library.